Despite living at the southern tip of Africa we have some really inspiring inventions:

The world’s first heart transplant was performed by Dr Chris Barnard in Cape Town on 3 December 1967. The patient Louis Washkansky was suffering heart failure at the time and Dr Barnard took the chance to operate him. After that, Barnard became an international celebrity. He went on to perform more than 10 other heart transplants, with one of the recipients surviving a further 23 years.

The famous swimming pool vacuum cleaner was invented by Ferdinand Chauvier from Springs. Chauvier tried to figure out a way to take the hassle out of pool cleaning. The result was the Kreepy Krauly and the first one was created in 1974. Our dads have been happy ever since.

Created by Eric Merrifield, a harbour engineer from East Londeon, Dolosse are large, unusually shaped concrete blocks weighing up to 20 tons.  They were initially called the “Merrifield block.”  A Dolos resembles the knucklebones of a sheep and was first placed at the breakwater in the East London harbour.  The structures are designed to break up wave action and protect harbour walls and coastal installations. 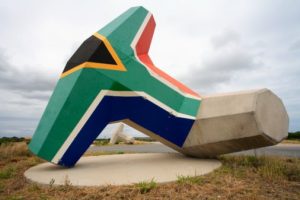 Q20 was invented in 1950 in Pinetown, KwaZulu-Natal by a Mr Robertson, as a product to displace water from the distributor caps on the old VW Beetle, which was notorious for stalling in wet weather. It was an effective water repellent, kept rust at bay, eased squeaky door hinges, and made it easy to release rusted or seized nuts and bolts. Initially he did not know what to call it but he told his neighbour that it certainly had 20 answers to 20 questions.

Q20 is a solution to many of my problems when hubby is not around to assist.

The South African-made speed gun, developed by Somerset West inventor Henri Johnson, was formally launched at The Oval in England during the 1999 Cricket World Cup.


After driving under grey clouds loaded with rain f