THIS MUST BE CINDERELLA’S GARAGE! 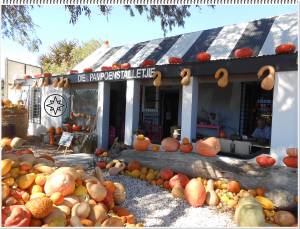 We all know the fairy tale called Cinderella from our childhood.  I think I have found the garage where they park all the pumpkins that are in need of repair or not in use! The “garage” can be rated as one of the best visual farmstalls in South Africa, if not in the Southern hemisphere!  It is hard to miss it with all the colourful pumpkins in front of the store when you following the R60 between Worcester and Robertson. The farm owner grows pumpkins in a wide array of forms and sizes, the one as beautiful and pleasing to the eye as the other when displayed under the tree in front of the shop.  Travellers are attracted by the colourful display and stop to take some pictures. You can take as many pictures as you like, the only requirement is that you make a donation to the local school… Read more >