We were camping in the Central Kalahari Game Reserve (CKGR) in Botswana.  It was our first visit to CKGR and I did not know what to expect at all. I expected barren, flat, open areas with sparse vegetation.   How pleasantly surprised I was!  The Kalahari was not green, but the yellow grass was waving in the wind and trees dappled the hills. 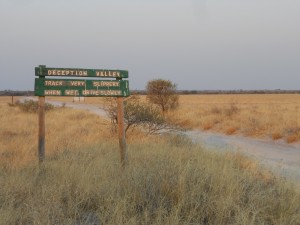 After filling up at the Shell Petrol Station in Rakops (only three pumps for different types of fuel. We could luckily fill up before they ran dry a couple of days later. Thereafter, we set off on the sandy road leading to Matswere gate.  After driving about 500 meters we decided to deflate the tyres to enhance a more comfortable and easy ride on the corrugation with the fully laden bakkie. 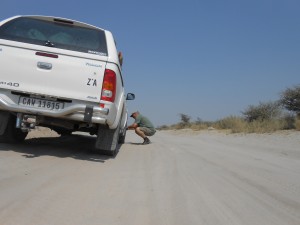 As you have to be self sufficient in all aspects, we took 40 litres of diesel and 60 litres of water (drinking and washing) to last us for the week that we were planning to spent in the wilderness.  The park has an everything in-everything out policy, except you are requested to leave your extra firewood for the next visitor. 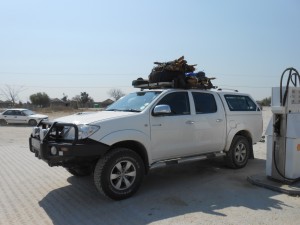 About halfway to the Matswere gate a car approached us from the front at quite a speed with daylights switched on.  And if I say a car I mean a car – one of the newest Mercedes Benz models!  Well, to say the least we were stunned out of our socks to find some stupid guy hammering a new – or for that matter any car – on a sandy track with quite a high  middelmannetjie at some places. 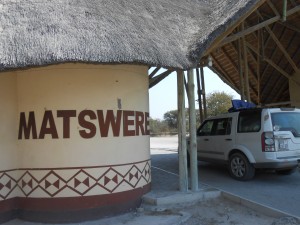 Big was our excitement when we looked at the sightings board at reception and noted that there were pins allocated to leopard, lion and hyena around the Deception pan  area.  However day one and two we did not spot anything interesting during the day. Neither did we hear a lot of sounds at night – just  saw some oryx and springbuck grazing on the nearby pans.  Something “exciting” is more in the ranks of a lion, cheetah or leopard, but we also have appreciation for the smaller creatures of the Kalahari. 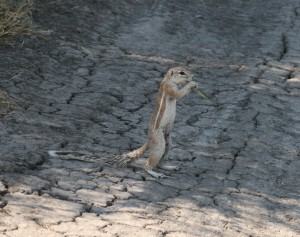 On day three things started to brighten up.  After having early morning coffee on the pan we spotted a lonely lion crossing the road and in the afternoon two cheetahs resting in the shade of a tree at Leopard Pan.  Not bad at all! 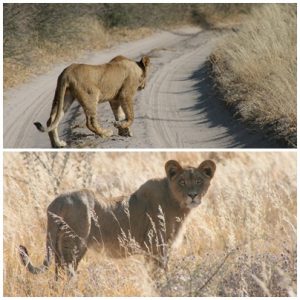 The rest of the week we saw some more lion, big kudu at the waterhole, jackal, springbuck and were surprised when a couple of curios bachelor giraffe came really close, displaying no fear, to do an inspection of the bakkie.  This gave me the opportunity to take some pictures of these tall and elegant animals. 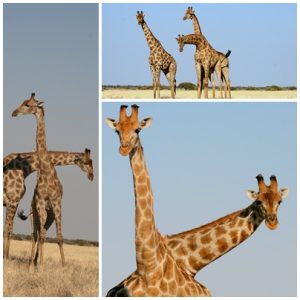 On day four we found that a herd of oryx was very much intrigued by three lions sleeping in the shade of a thorn tree.  Up to 50 of them gathered to have a look at the sleeping enemy – not that the lions actually noticed the oryx staring at them! This kept us entertained for a couple of hours while the camera kept on clicking to capture everything as the scene unfolded in front of our eyes. 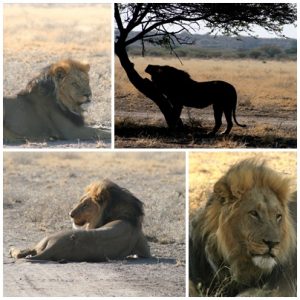