With the ongoing ebola outbreak in West Africa I am pretty sure most of the world now knows where the once forgotten Sierra Leone is located.

My first experience of Sierra Leone in 2011 was ten years after a bloody civil war (1991- 2001) and before the horrendous ebola outbreak in 2014 which is the largest in history.  Sierra Leone – a struggling country filled with friendly people with warm and welcoming hearts. 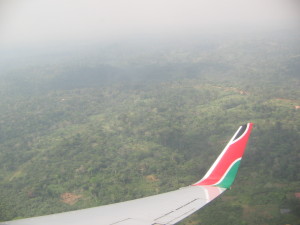 Flying over Africa enroute to Freetown

Crossing Africa on my flight from Johannesburg (via Nairobi and Accra with Kenya Air) to Freetown I sat next to a proud soldier who was on holiday from Afghanistan. He was super excited to see his family back home in Freetown after an absence of three years from his home country.   His eyes were shining bright and he could not wait to put his feet on home soil and hug his family once again. Oh yes, and me?   On a visit to hubby since this was his designated office for a year or two. 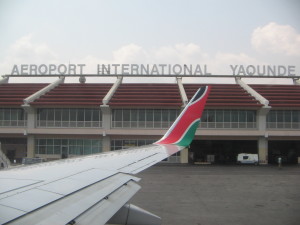 Arriving at the old Lungi Airport I stepped into another world.  Welcome in Sierra Leone the country of the magnificent cotton tree and torrential rain and …. a bit a chaos.  First the necessary stamp at immigration, then on to the yellow fewer check point before you attempt to find your bag.  Once you have your bag, hold on to it. 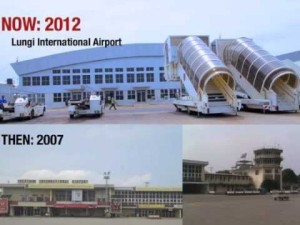 The before and after look of the airport

After a final baggage check you step outside and meet the crowds.   Now everything turns into a bit of chaos as everyone is haggling and competing for your attention to carry your bag. 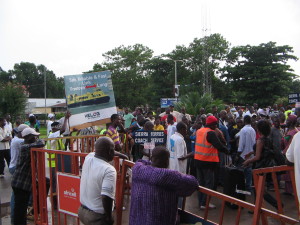 Chaos outside the old Lungi airport 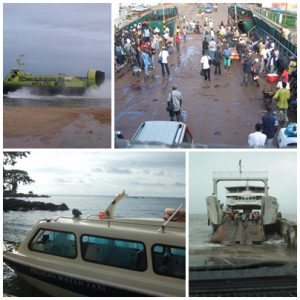 The choice of transport across the bay from Lungi to Freetwon

When I visited the choice to cross the bay was between the car ferry which goes to Kissy ferry terminal or the Pelican water taxi or the hovercraft, which was the quickest option, and arrives in Aberdeen.  (Note:  according to wikitravel.org the hovercraft seized its operation in 2014).  The crossing is an experience in itself as it can become unpleasant at times when the sea is rough and plastic gets entangled in the boat’s propeller.  Nevertheless an experience not to be missed.

Our accommodation for the visit was located next to the Man of War Bay with a view on the route to the harbour where every morning you wake up with the sound of big ships passing by to dock in the Freetown harbour.   On the odd occasion you will also spot the US Coast guard doing their anti piracy patrols in this part of the world.  This was part of my daily routine to keep track of when ships arrive and leave the bay. 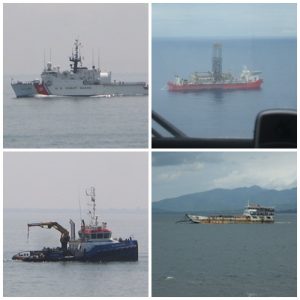 Like everywhere else in Africa a lot of the locals live off the sea. Fresh fish and sea food are aplenty in contrast to the availability of red meat at a price (unless you know where to find it!). The local fishers gained new respect from me.  Every day they go out with their wooden boats (some of them without engines) from the Man of War Bay battling the wind and high seas to make their daily catch to sell it on the beach in the late afternoon. 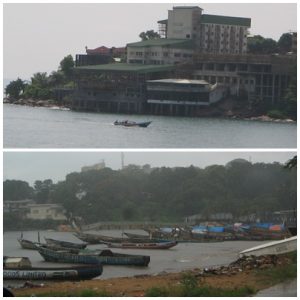 View on the Man of War Bay

Daily life here has a pace of its own.  Going to the shop creates interesting obstacles of its own and the trip more or less evolves like this.  First you have to shoo away the goats sleeping on the driveway to get into the road.  Then you drive like some drunkard as you swerve to avoid all the potholes in the road and at the same time avoid running over someone who is dodging the pools water that formed in the downpour.   But you will make it to the shop. 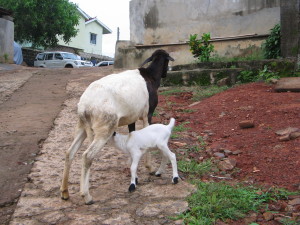 Resident goats on the drive way

The next challenge is to miss, one of the many, stray dogs that roam the streets.  On your way you will also see some war victims in wheelchairs battling the potholed roads in the rain.  Then the ever present police blockades,  especially popular over the Christmas period, that needs to be negotiated before you have to battle for a parking space at the shop.  Patience is the answer! 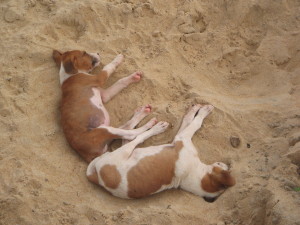 Free roaming dogs of the city

Like all other African cities the roads are poor and the traffic congested and moving at a snails pace.  Be patient, smile and enjoy the ride! 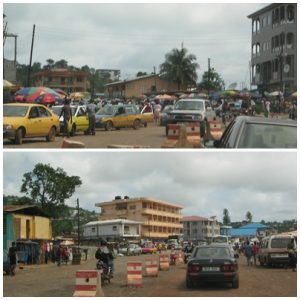 However living in Aberdeen we were lucky to have Lumley beach with its long sandy beaches at our doorstep.  Being  the closest beach to Freetown it is always busy and somewhat littered with all kinds of objects and plastic of various shapes and sizes.  For a day at the beach it is a good option to head further out of town to the less crowded beaches like Lakka and River No 2. 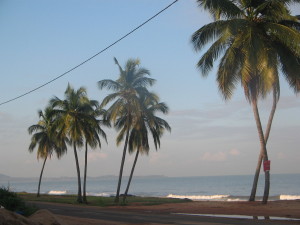 A lot has changed since my  first visit to Freetown – a new airport building was constructed and a lot of the roads were upgraded by the Chinese and big mines were put into operation creating a lot of jobs in the country.

In my next post I will share more about my visit to Tacugama Chimpanzee Sanctuary on the outskirts of Freetown and our Christmas at Lakka Beach.

Somehow Sierra Leone sort of gets under your skin – you either love it or hate it.  But I loved the unique rhythm of Freetown!  Alas now all that remains is the good memories and friends I have made.  🙂

Yet again a country not on my wish list, but I am grateful that I could pay a visit.

“The journey not the arrival matters.”
T.S. Eliot