A pontoon is a simple floating barge designed to get vehicles across a river, and the word is often shortened to pont.

If you like to explore the back roads of South Africa the route through the Overberg that will take you to the pont at Malgas across the Breede River is a worthwhile, one of a kind experience. 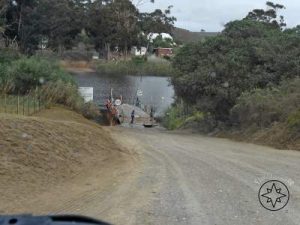 What makes the Malgas pont rather special?  It is the only remaining hand-drawn pont of its kind in the country. There are at least two other pontoons that comes to mind when writing about this topic, but they are not hand-drawn – the one over the Kei River in the Eastern Cape and the one at Sendelingsdrift in the Richtersveld crossing the Orange River in the Northern Cape but it is not the same as the hand-drawn one at Malgas.  I am adding these two pontoon crossing to Wallace’s travel list! 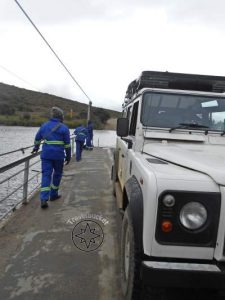 The service begun in 1860 and is still operational today from sunrise until sunset, weather permitting. It will take you about 10 to 15 minutes to cross the river.  Just enough time to take the compulsory pictures of the Land Rover on the pont and have a chat with the friendly operators of the pont.  As they were walking up and down on the pontoon I was wondering what is the total amount of paces that they take every day.  Surely, during the holiday season and over weekends they walk further than during the week when there are less visitors. 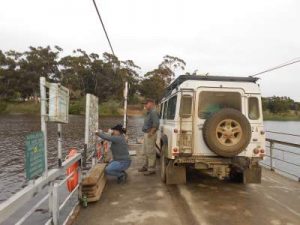 The village of Malgas peaked during the year 1860 when it boasted a hotel, shop, boarding house, school, church, goal and a powder store.  During this period fresh water was also transported in flat bottomed boats down river to Port Beaufort and Infanta at the mouth – a distance of about 40 kilometres.  However, today all the hustle and bustle are gone and you will find mostly accommodation, a couple of holiday homes and a little country store along the shores of the river.

Malagas was the name of a Hottentot chief, whose kraal was situated near the site. The name of the village was changed to Malgas because in the olden days, post for the village ended up in Malaga Spain!  Today both versions of the name are still in use.

They take only cash – no card machines in this part of the world.  The fee we paid during April 2018 was R55 per vehicle.