THE LIFE OF A LANDY WIFE

It has been almost a year now since we sold our trusted Hilux, which gave us many kilometres of pleasure in Africa without a glitch, but the time has arrived to look for something else.  Some new adventures await.

Boys are boys and they need challenges.  So, the scout for something “new” was the challenge – the price had to be right (we cannot buy new), it had to meet certain criterion as the vehicle will be used to take us to some far away places, preference of make and model  ……. and so the list expands.

To tick most of the boxes (as all is not a reachable equation) some time or rather a lot of time was spent on the internet searching posts, zooming in on pictures to look whether dust accumulated, more or less combing everything in detail. This became a daily routine for more than six months and over the weekend I once again became a Landy wife!   By now I know all the different models of a Land Rover – 90, 110, 130, pick-ups, hardtops, station wagons, Discovery or Defender. 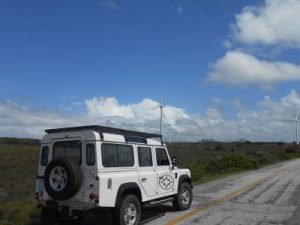 However, my knowledge does not stop there.  I also know about tyres – mud terrain versus all terrain, brands (long standing ones versus new Chinese brands that appeared on the scene recently), body roll, top speeds, suspension, management systems, dual battery system, etcetera.   Discussing these topics I can keep you busy for a couple of days.  If you have any questions, leave it in the comments section and we will gladly answer it.

Then there is the accessories list of what is needed and what will work and what not.   As we have done a couple of overland trips in the past I had to give a real input and not just pretend that I am interested.  The test was on.  This is all about gas bottle holders, long range fuel tanks, bull bars, nudge bars, winches, spot lights, etcetera.  I think by now you have the drift of being a Landy wife.

The final choice landed on a white (according to my better half all colours are beautiful as long as it is white) Td5 Land Rover Defender with a Front Runner roof rack – that’s it.  All the other tick boxes on the list was forgotten about when we felt in sync with this specific vehicle.

Are we happy?  Yes, it sounds like a diesel, it drives like a truck, it already has its little niggles and yes of course it drips oil, but we love it already!

I just need to tell you that today it passed the roadworthy test with oil leaks and all …  The comment from the guy in the inspection bay when he saw a bit of oil on the diffs, just wipe it and bring it back.  I think he knows or either he loves a Landy.

Keep a lookout for the TravelBucket Landy (named Wallace); you never know where you will spot it.   🙂