Today is the first day of 2015 – a new year full of surprises, laughter,  fun and hopefully interesting travels that awaits.

We set off in George at a leisurely pace with clear blue skies, travel over the Outeniqua Pass via Oudtshoorn and aim for Prince Albert on the other side of the Swartberg Mountains.   The road is quiet.  I think the people are recovering from the New Year’s parties … 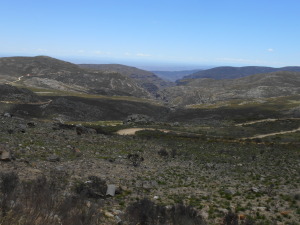 Once over the Outeniqua Pass the temperature rises to 31 degrees Celsius in the Klein Karoo.  It has been quite a while since I last traveled the iconic Swartberg pass, a gravel road, on the R328 but as all the previous times we were rewarded with stunning views of the mountains and yet again I am in awe of the skills of Thomas Baines – son of the famous Andrew Geddes Baines who built Bain’s Kloof Pass and many more – who constructed the road from 1881 until 1888 through the Cape fold mountains.  Today the dry-stone retaining walls are still in place and almost 120 years old. 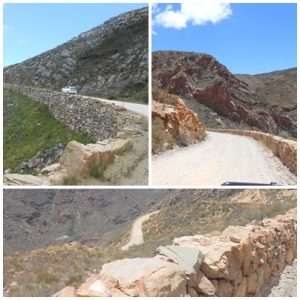 Along the road we stop for a geocache or two that are still outstanding and I have time to take some pictures of the veld flowers that are in bloom at this time of the year.   Just a reminder – keep your eyes open for snakes and scorpions when you are walking in the veld. 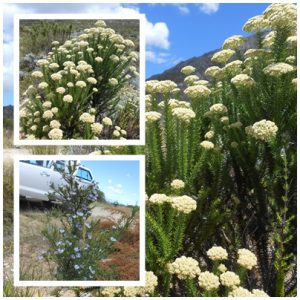 Before we reach The Top we see a brandwag (usually a big male baboon) keeping watch over his clan  whilst basking in the sun!  For those of you who are not familiar with baboons – close the doors and windows of your car when alighting, because they are very curious and can cause havock in your vehicle. 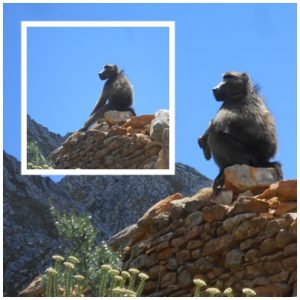 When we arrive at the top of the pass, which is located at  33°21′8″S 22°2′45″E , some tourists are enjoying their lunch at the viewpoint and admiring the vistas towards the Karoo.  The road is busy and you have to keep an extra special  lookout for cyclists and motor cyclists in the dusty conditions.  (This is a very popular motorbike road so please do not cut corners)! 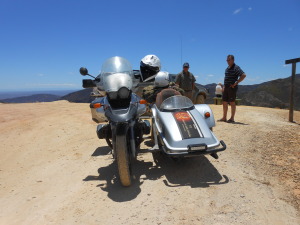 The pass is  famous due to the spectacular geology that is exposed at its Northern end as you descend down to Prince Albert to the valley floor. The contortions in the rock display astonishing anticlines and synclines, and the vivid red coloration of the surrounding Quartzite is remarkable.  The pass was declared a national monument in 1988.  Along the way there are relics of the old  prison, toll hut and other historical sites.  This was Thomas Baines’ last engineering masterpiece. 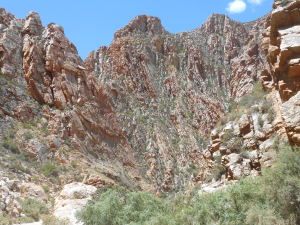 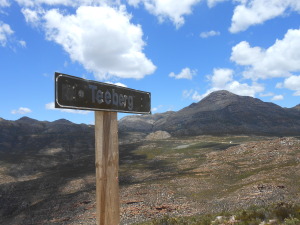 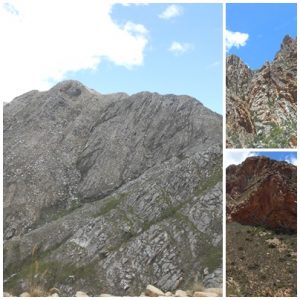 You will also find the turn off to Die Hel or Gamkaskloof on this road.  Do not be fooled – it is a mere 37 km, but adhere to the time given on the signboard.  It WILL take you (+-) two hours of slow travel on the narrow and winding road!  Today however we will not take the turn off as we have visited Gamkaskloof before and are aiming for Prince Albert. 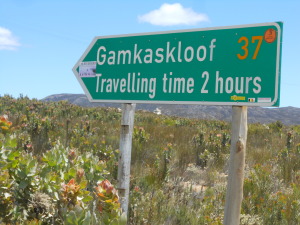 Prince Albert is buzzing over lunchtime and after passing the beautiful Dutch Reformed Church in the Main Street  our choice falls on a succulent burger and German bokwurst on the stoep of the famous Swartberg Hotel. 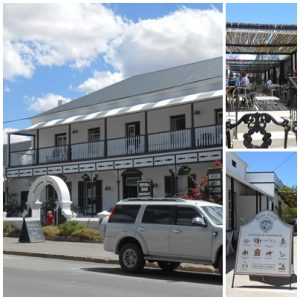 In the late 19th century South Africa had more than 2000 mills, some of which dated back to the time of the first European settlers. Today only a few hundred of these mills survive, and of these, only a handful have been described or recorded in any detail.  On our way back we stop at the historic water mill, at the Southern edge of the town, to take some pictures. The mill was built by HJ Botes and was taken over by NAA Alberts and remained in his family for three generations. The mill was declared a national monument in 1963. 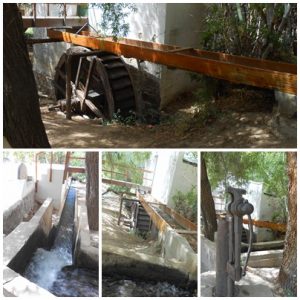 I will keep you posted on some more exciting travels in 2015, but this is my story and my smiley to start an exiting new year!