When hubby went to work in Sudan (before the divide into Sudan and South Sudan) I had to grab a map and look closely where exactly in Africa  it is located! 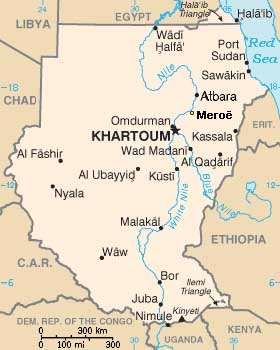 Then I started to Google all the lesser known but interesting facts about Sudan. As the temperature rises to 50 degrees Celsius in summer time the first thing that strikes you as you get off the plane in Khartoum is the oppressive heat whether it is early morning or late at night and then the different culture and way of living due to the extreme temperature where the tarmac melts during midday.   However the Sudanese people are very friendly and always willing to share what they have at their disposal even if it is just cup of sweet tea or a glass of water.  Everywhere you will find clay pots on the street where people can have a drink of water for free.

The traffic congested city of Khartoum is quite a dusty place especially when a haboob (a desert wind full of dust that just seeps in everywhere) strikes.    It is quite an eerie feeling when this phenomenon strikes as it gets totally dark and dusty within minutes. 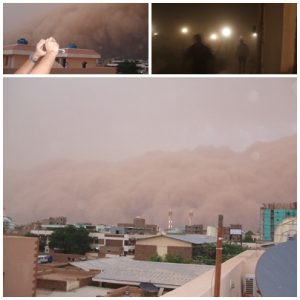 Experiencing a haboob in Khartoum

However a big plus is that fuel is laughably cheap due to big oil deposits especially in the present South Sudan.   During 2008 when I visited it was about R2.80 per liter in comparison to South Africa where it was about R9 per liter at the time.  This is a big contributor to the traffic problem that the city faces.  As there are no curbs on the pavements hurried drivers will use the pavement as part of the road and often the traffic ends up in five lanes when there is only space for three on the tarmac.  So be wide awake when you walk on the “pavement”, because you are not totally safe there.  Mix into the traffic a right-handed vehicle in this left-hand drive country and things amounts to quite a challenge!

A little known fact is that Sudan also have Nubian pyramids at Meroe, approximately 100 km north of Khartoum, albeit smaller than the famous ones in Egypt.  These pyramids were built about 800 years after Egyptian pyramid building stopped.  Some crazy Italian  thought there were valuable treasures hidden inside the pyramids and decided to bomb them to retrieve the valuable stuff.  This explains why some of the pyramids are beheaded.  There was some restoration done to the pyramids but actually a very bad job was made of the restoration project!

Be prepared for a VERY hot day in the desert when you visit Meroe and the Nubian temples as there is no shade to escape the relentless sun.  Bring enough sunblock, water, some snacks and sturdy walking shoes as the hot sand gets inside your sandals while walking around and can be very uncomfortable.   Remember also that your knees and arms should be covered when visiting these sites out of respect for the Muslim people.  This is a country where the temperature easily rises to 50 º Celsius during the day – so be prepared! 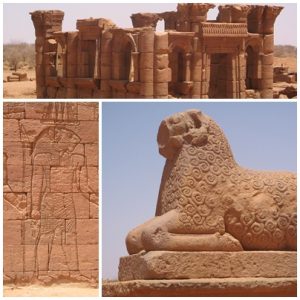 Personally to stand beside the Biblical Nile river in Khartoum, the longest river in Africa, struck me with awe.  As a child we always read about the Nile in the Bible and here I was seeing and standing next to  it at the confluence of the Blue and the White Nile, the life source for many Sudanese people.  What a privilege!  After viewing the confluence of the two Niles find Ozone Cafe in Khartoum 2  (which is located on a roundabout) and treat yourself to some pastries and a cold drink.  This is a popular hangout for ex-pats as well locals.

After some refreshments take the effort and  find your way to the Blue Nile Sailing Club.  The first thing you will notice upon entering is a gray colored boat onshore about 50m from the riverbanks. The El Malik was formerly one of Kitchener’s (yes, the famous Lord Kitchener) gunboats that has seen many battles such as the Battle of Omdurman. After retiring from government service, she was handed over to the Blue Nile Sailing Club and they used it as headquarters.  By the the late 1980s, the El Malik faced another battle – corrosion – and the gunboat faced the possibility of sinking.  Ironically, a massive flood in 1987 washed ashore the gunship and it still sits there until the present day.  The sailing club also offers a couple of campsites next to the El Malik if you want to pitch your tent.

Although Khartoum is a flourishing capital city there is also a lot of half built buildings all over the city. The building regulations stipulates that you start paying taxes once the building is complete.  To avoid this the residents never complete the building and just live in the bottom part of it to avoid paying the taxes and because of lack of rain and hot weather this is possible all year round! 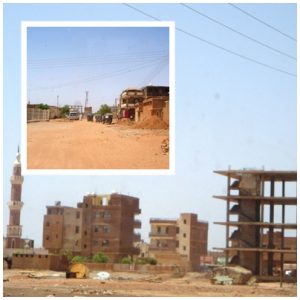 The streets of Khartoum

As this was the end of our overland trip we took a final trip with our vehicle to Port Sudan on the Red Sea to ship our pickup back to South Africa, after all the necessary paperwork was done in Khartoum. 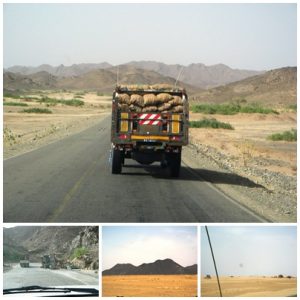 Scenes from the road to Port Sudan

To see the Red Sea was also a special occasion as you read in the Bible and learn at school of the importance of it.  Never had I thought that I will one day see it myself! 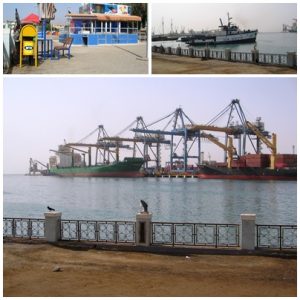 Scenes from the esplanade in Port Sudan

After spending the weekend in Port Sudan, which is not as hot as Khartoum, we flew back to Khartoum with Nova Air.    Sudan certainly opens your eyes so that we  once again can appreciate what we have back here in good old South Africa!    Ordinary food stuff like strawberries, fresh milk and cream and yogurt is not easy to find in this part of the world.

I must confess Sudan was never on my travel bucket list, but nonetheless am I  grateful for the experience of a lifetime.  A smiley added and a tick to my travel bucket.  😉

A good read on the history of Sudan and the role of Gordon in Khartoum is a book called The White Nile by Alan Moorehead.  Emma’s War by Debora Scroggins also gives an insight into the Sudan.

“Travel expands the mind and fills the gap.”
Sheda Savage


LOCAL WILL BE LEKKER!

With the steep petrol price

We had some extreme flooding in t

Head on over to our shop @travelbucketsbasket to d

Pick the terrain and the Jimny will drive it

BECAUSE WE SMELL THE WEEKEND!

ONE OF THE BEST ADVENTURES

Doing a canopy tour is