Late afternoon we boarded the train at Don Muang train station in Bangkok for an overnight trip to the less touristy Nong Kai in the Nothern parts of Thailand. 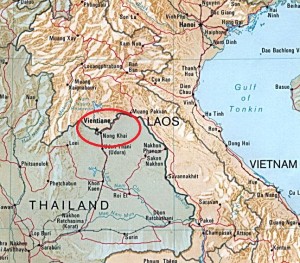 The purpose for the trip is a surprise visit to one of hubby’s Aussie friends who lives in Nong Kai with his wife and children and at the same time hop over the border to renew our visas as it was about to expire the day before we were scheduled to leave Thailand. 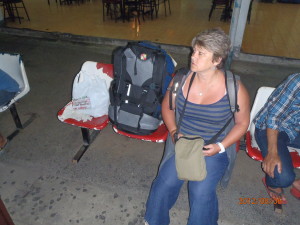 First trying to find the right train and coach at Don Muang  tested our nerves because not a lot of the locals who use the long distance train system actually speak English.  So a lot of hand signs and Nong Kai, Nong Kai was going around and at the order of the day!  At last we did find the train and our clean compartment that we booked via the website of Man in Seat 61 (www.seat61.com). 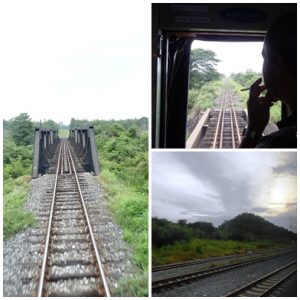 Scenes from the trian window

On arriving in Nong Kai we discovered that Lance is in a hospital in Bangkok for an eye operation!    Nonetheless Lance arranged with his wife’s Thai family and cute little daughter to pick us up in a tuk-tuk at Nong Kai train station.  We quickly settled in at their accommodation along the Mekong River as he  will be home the following day from Bangkok.  Not a problem at all for us.  This gave us time to explore the town and surroundings. 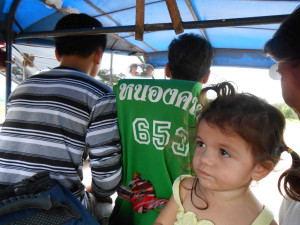 Every morning we had our coffee on the stoep, overlooking the Mekong River, and watched the town come alive.   One morning early we even saw a young elephant and his handler strolling down the esplanade! 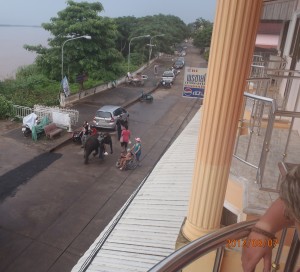 After breakfast at the Rim Kong Café we strolled down the esplanade to the Taa Sadej Market located just down the road nearby  the Mekong River. It is largely covered and winding through more than seven streets, it has much of the feeling of a middle eastern bazaar where an extraordinary range of items from Laos, Vietnam, Thailand, China and even Russia can be found. It is a day time market, selling clothes, fabrics, electronics, optical equipment, ornaments, knickknacks, massage aids, traditional furniture, and oddments beyond description . 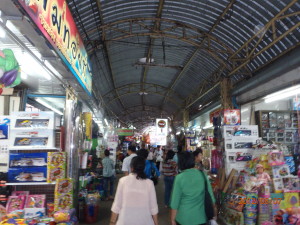 Deciding to pick up some geocaches the one day we rented bicycles and followed our GPS. 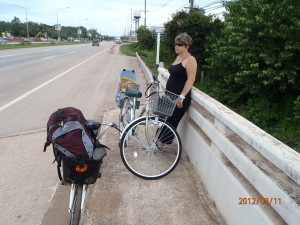 These Chinese bicycle jobbies do not provide a comfortable ride!

This took us to the strange place of Sala Kekou located on the eastern side of Nong Kai.  This utterly bizarre park of massive sculptures (some over 20m tall) is the handiwork of the mystic Luang Pu Bunleua Sulilat, who bought the land in 1978 when he was kicked out of his native Laos. A similar park of his earlier work remains near Vientiane.   Synthesizing Buddhism and Hindu ideologies, Buddhas, many-armed goddesses, naga snakes and all sorts of human-animal hybrids dominate the scenery. 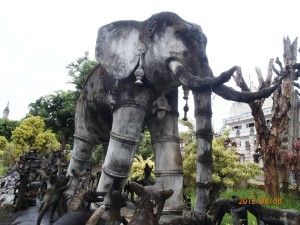 On our last morning, after completing all the necessary paperwork and paid the applicable fees, we hopped on the cross-border buss on the Friendship Bridge to Vientiane to get the necessary stamps in our passports to extend our Thai visas.  To save some time see the link http://wikitravel.org/en/Nong_Khai  on what to do once you arrive at the border post as it is complicated to follow if you do not speak Thai.

Although just on the other side of the mighty Mekong river Laos is a totally different country with its own unique modes of transport and chaos and ever present pollution. 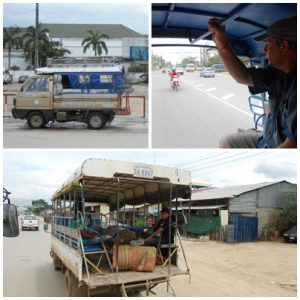 At a leisurely pace we worked our way down to the Mekong river as the humidity is very high.  Vientiane, with its strong French influence, is an easy city to navigate per foot and we just kept a general direction towards the river where we saw orange cladded young boys stand out in stark contrast to the brown waters of the Mekong. 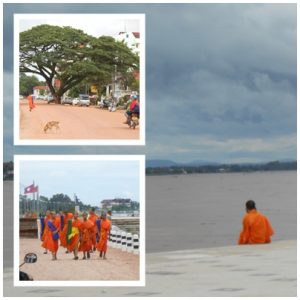 After finding a geocache in Laos, and adding a smiley to our caching map, we enjoyed a good milkshake and juice at one of the many street cafés. 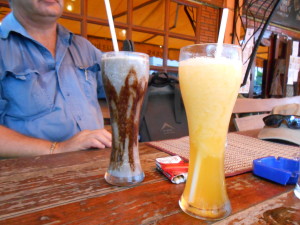 Refreshments at a street cafe

It was time to  start our return journey back  to Nong Kai.  Entering Thailand from Laos is a quick and easy process and just takes a few minutes to complete.  Mission accomplished – we got the stamp to extend our visas! 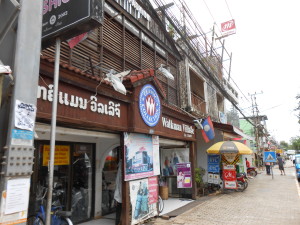 Our holiday was coming to an end and we had to get back to Bangkok to catch our night flight home.  At Nong Khai station we met two interesting Dutch guys who came to Laos for an off road experience in the jungle.  They were just babbling with excitement about their experience in Laos. This is the part of travel that I enjoy the most – meeting interesting people at strange places and sharing experiences! 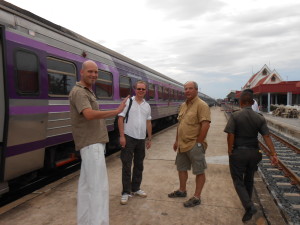 Currency note:  Laos use the Kip as currency,  but USD is favoured at most of the tourist places in town.

“Adventure is worthwhile in itself.” (Amelia Earhart)