2018 marks the 70 year celebrations world wide of the icon Land Rover brand.    Now the mere words “Land Rover” is a bone of contention, because it stir up opposite emotions – love or hate.   The word “hate” sounds a bit harsh so I will rather refer to it as a “no love for a Land Rover”.

At the celebrations held at the southern tip of Africa it was only love for Landies that was going around the whole weekend.  Everyone was discussing and checking out other Land Rovers, smiling and waving the Landy wave to your fellow stalwarts.  Make no mistake there were also the “no lover of Land Rovers” that were curious (and maybe envious) who made their way to the festival to have a look at the goings and doings of the Landy lovers.

What an iconic weekend it was!  Sharing your story  (everyone who drives a Land Rover has a story), sitting around the camp fire, listening to other people’s stories, seeing great sunrises, making new friends, strolling through the campsite to see what fellow Landy owners has figured out to make life easier, lining up and driving in convoy to another icon where two oceans of the great African continent meet for a short church service in the open air and take the obligatory pictures, of course.  And one night when we looked towards the skies we  also saw a beautiful moon rise.  What more can you ask for?  Life is good when you drive a Defender. 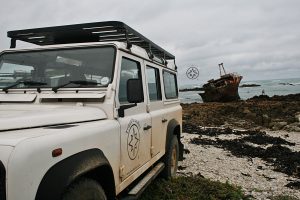 Of course there was the odd Land Rover that had its usual niggles to arrive in time, but then the inspirational stories surrounding it, how friends supported him, and made a plan, so that he can arrive and attend the bash.  The camaraderie within in the Land Rover fraternity is amazing – you are not alone;  someone is looking out for your all the time.

We also had the privilege to drive on some stunning super white, unpolluted sand dunes on a private farm where we visited one of the oldest water aquivers in the region where the San collected their fresh water from.  As part of my New Year’s resolutions of 2018 I also did my duty and picked up my five pieces of plastic that washed up on the beach.  (Feeling proud of myself!).

The festival was also honoured to have the very first Land Rover that was imported to South Africa on the show.  It was still in mint condition and attracted lots of attention, poses and pictures taken with it!  Some of the very latest models were also present and then, of course, an array of models that fits into the Land Rover range, even a forward control that served in Afghanistan as an ambulance – you see there is the story! 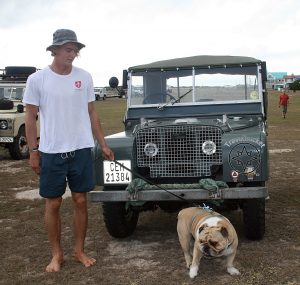 When you follow the link https://www.youtube.com/watch?v=r_RfMbfaIss&feature=share  to Youtube you will catch a bit of the vibe that was going around during the weekend.

And a final picture, for those of you who are not familiar with the Landy wave,  to demonstrate how it is done!

We as a family are proud to own one of the collectable icons of the motor industry.  I am raising my glass to Wallace (as our Landy is aptly named) and many more happy hours and kilometres that we will spend in him.  Being on the topic of names, I still need to do a blog post on Landy names in the future, because I noticed some interesting ones at the bash.