Once home after the epic journey from Johannesburg to George Livingstone (as the Landy was named) was taken to a friend’s shed where the restoration project started.  Rivet by rivet and bolt by bolt Livingstone was stripped of it seats, canvas canopy and all its panels, nuts, bolts and springs – right down until only the rusted chassis remained. 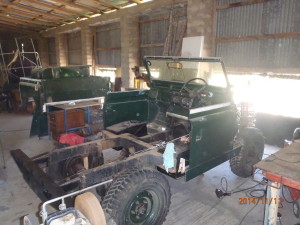 Sometimes the surprise was big that something was still in such a good and original condition and the next moment the moods were down on the ground when rust appeared to be worse than expected.  There were also some mystery finds such as a couple of bones in the chassis … 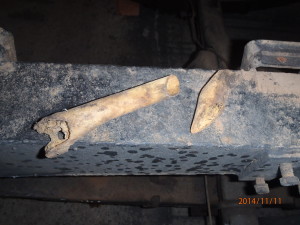 Some of the mystery objects

Every panel and part was stacked and packed in neat little heaps waiting for the time when it was ready to be assembled again. 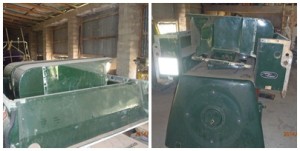 Panels and parts stacked up

Within days the Haynes owner’s manual, which was ordered by mail from a bookshop in South Africa, arrived.  Things were falling into place for the project to start!

For the first two weeks hubby came home every night with oil from the top of his head to the tip of his toes and soon I realized that this will be the scene for the next couple of months.  After all it is a Landy restoration project – oil is just part of the scene whether in running condition or in a restoration project!

Our days evolved around Livingstone and what has to be ordered, cleaned, picked up, e-mailed and fixed.   Parts which could not be sourced in South Africa arrived within a week if ordered from England (which was in the minority).  The smiles were big when almost all the parts were sourced around the country.

Days, weeks and months passed with hubby returning to work in Africa every other month.  In the meantime a good buddy, and also a Land Rover boffin, was working on the project in his absence. 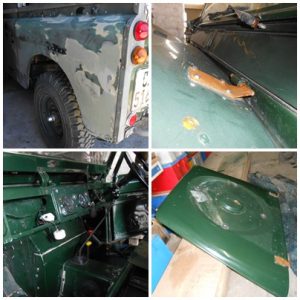 Getting all the detail right

Things were looking good and the time arrived that it could be sent for rewiring as the existing wiring had some strange electrical concepts … (well at least I thought so)! 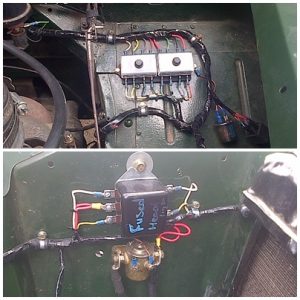 About four months into the restoration project it was time to take the dust of the panels and start assembling it again.  Things were looking good and a plan was coming together.  The progress was slow and the tempers flared at times, but the friendship (and the marriage) lasted! 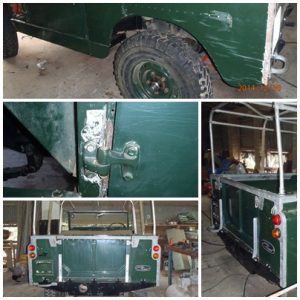 Slowly but surely it was getting there

After six months of love labour hubby took Livingstone for the road worthy test.  There were just minor issues that had to be resolved before he was licensed and on the road. 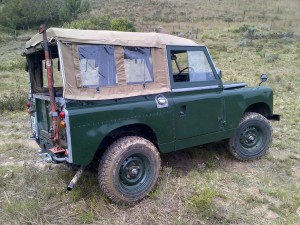 Now Livingstone is turning heads, drawing attention and conversations wherever we go with him.  All that is left now is (when the budget allows it again) to do a proper paint job before she can retire. 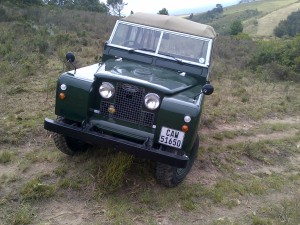