Shipwrecks always have some sort of mystical ambiance about them for me. 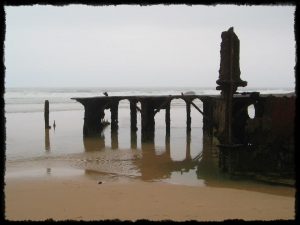 If you are willing to take a more or less 6km round trip eastwards along the beach at Glentana you will reach the mossed skeleton of the floating Port Natal dry dock resting on the beach since 1902. 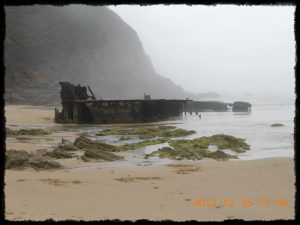 HISTORY OF THE WRECK:

It was stranded after the tow rope from the steamer Baralong parted during a tow operation from Durban to Cape Town. The dock was a Clark Standsfield self-docking design and built at CS Swan & Hunter’s yard at Wallsend (Yard No. 279). It was oredered by the Natal Government for the Harbour Commissioners of the Port of Durban.

It was to be the first floating dock introduced into South Africa. The dock was launched on the 6th of October 1902, and it was originally intended that the Dutch Smit Tugs, used to tow out the Bermuda dock, would be engaged to tow the dock to Durban, but they were not available (busy in Bermuda), so the towing contract was awarded to Bucknell Brothers to use one of their Cape trading steamers. The tow cost £8000, and the dock was insured for £72,000 for the tow. The steamer Baralong left the Tyne, with the dock in tow, under the command of Captain Mamillen with 66 officers and men, 16 of whom were on the dock under Captain Gow. After a passage of 50 days, the dock arrived at Cape Point, South Africa.

On October 30th 1902, the steamer and dock set off for Durban, but in the evening of November the 1st a strong North-Westerly gale and heavy seas were encountered. Baralong and the dock headed for Mossel Bay, near Cape St. Blaize, but the port towing line parted (an 18 inch manilla hawser), leaving the dock to the mercy of the wind and waves. An attempt was made to re-secure the dock, and this the crew succeeded in doing with a flexible wire hawser, but this also gave way. The Mossel Bay harbour master, Captain Dryden, put out in the small tug Morning Star, but the seas were running high and the tug had to return to shelter. Dryden tried again with a larger vessel, the steam trawler Undine, but the dock was close inshore now. HMS Monarch, based at the Cape Naval Station also tried to give assistance, but without success. It was therefore decided to give up further rescue attempts and leave the dock to its fate.

The dock beached itself in a creek at Glentana, Mossel Bay, and was lifted so far up on the beach that the men on board were able to walk on shore. Attempts to retrieve the dock were made later, but it was firmly embedded in the sand and surrounded by rocks, and so it was abandoned.

George Parkes, a local entrepeneur, bought the salvage rights to the dock, and dismantled it as far as possible, removing all of the machinery, pipes etc. What was left of the dock was left in its resting place, and remnants are still there to this day. Interestingly, the medicine chest from the dock is in the Millwood House Museum. Knysna, South Africa, and some iron railings outside the Anglican Cathedral, and a flight of iron steps in York Street, both in the local town of George.

The above is an extract of a paper available on the internet.  You can read the full story at: 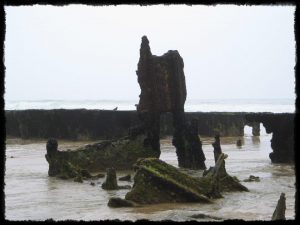 Have a look at a tides table when you plan your walk, because as you can see from the link above some sections of the walk can become treacherous during high tide.