Shipwrecks are tragic events, but for me a shipwreck is always shrouded with some mystery and stories on what went wrong, what freight did they have on board when tragedy struck, were there any loss of life and what were the weather conditions, etcetera.  Around Plettenberg Bay there are 18 hidden shipwrecks, the earliest one dating back to 1630, according to some research that I have done on the internet. 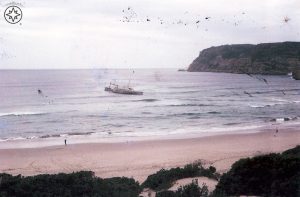 Close to the beach in 1967 (Photo credit: Pieter van Rooyen)

I am not giving away my age, but some of you who are old enough will remember the stranding of the Athina at Robberg Beach, Plettenberg Bay.  Some members in my family were still little boys and girls when this happened back on the 1st of August 1967.  During the summer holiday of December 1967 my father in law swam out to the wreck, as I think a lot of holiday makers did too. 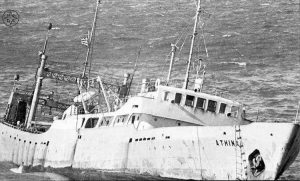 At the date of the incident the ship was already 19 years old.  During her life span she had a couple of names starting off with ”Penstermon”, “Galaxidi”, the “Rosa Vlassis” and lastly in 1960 she was renamed to the ”Athina”.   The “Athina” came to her end when she collided with a large rock, named “Whale Rock”, which lies at the tip of Robberg Nature Reserve, when she was on her way back to Greece.  The fatal trip around the Southern tip of Africa was due to the Suez Canal being closed, because of a war raging in the region at the time.   The cargo of tuna was lost, but the whole crew made their way to safety at Robberg Beach. 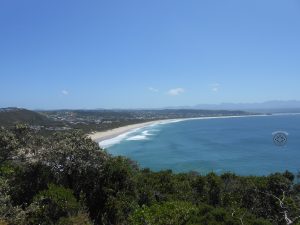 View towards Robberg Beach from Robberg

On a clear day when the sea is calm you can still see the skeleton of the Athina close to the beach.  Today the wreck is a popular diving site lying between 3 and 6 metres under the surface.  The rusty steel hull turned into an artificial reef providing home and shelter for young marine life.

A ship at harbour is safe, but that is not what ships are made for

PS:  I do apologize for the picture quality