Entering from the South you drive up the long main road of Graaf Reinet.  After greeting some friendly locals on your way you will find this historic church at the top end of …  well, Church Street!  The church is probably the most recognizable and photographed landmark in Graaff Reinet. 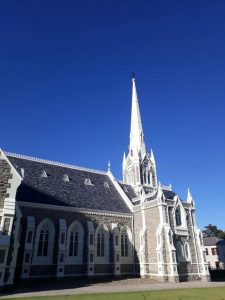 The church which claims to be the third oldest congregation in the Eastern Cape was designed by James Bisset.  He (Bisset)  incorporated some features from the Salisbury Cathedral in England into this majestic design.  The stone for the church was obtained locally and the church, which can seat 1,250, has a steeple of 45, 72 metres.  It also boasts a chimney – rather an unusual feature for a church I would think! 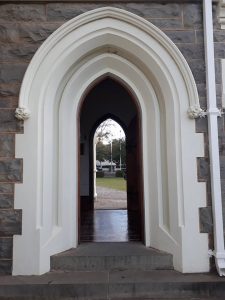 On the church list are some famous dominees (preachers).  Andrew Murray as well as Dr D F Malan, who later became Prime Minister of South Africa, were some of the names I noted while researching some interesting facts for this post. 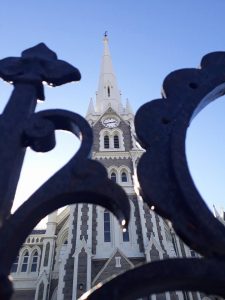 I always battle to get the spelling of this gem in the Karoo Heartland correct.   It is just one of those words that I never ever get right the first time.  I have to confess my stumble block lies in Reinet.  I tend to do a double N and double T in Reinet, but after this post I surely will know the correct spelling of Graaff Reinet!

“At first encounter the Karoo may seem arid, desolate and unforgiving, but to those who know it, it is a land of secret beauty and infinite variety.”   — Eve Palmer