“YOU ARE MY LIGHTHOUSE”

This iconic lighthouse which sits upon a rocky feature in Mossel Bay was first lit on 15th of March, 1864, about 100 years before I was even a twinkle in my parents’ eyes – by no means a modern observation post!

So, why named Cape St Blaize?   It is so-named because Bartolomeu Dias, the Portuguese explorer, and his crew first landed in Mossel Bay on St. Blaizes Day (3 February) in 1488.  Originally the lamp was visible as a single red light for 15 nautical miles but after several upgrades and electrification on the 6th of April 1931, today it can be seen at 22 nautical miles.  Then in 1914 the lighthouse received its first foghorn and  later a radio beacon with the call sign ZRF was added. 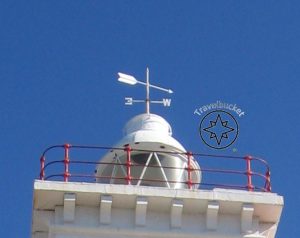 This manned lighthouse with a tower height of 14.9 metres is open to the public and is situated at E22 09 25 S34 11 10 or just follow your instinct if you do not have a GPS to the Point in town.

When out at sea it can be recognized as a group flashing of two every 15 seconds.  The lighthouse was commissioned as a result of the number of vessels using the bay as safe anchorage and also to replenish supplies. 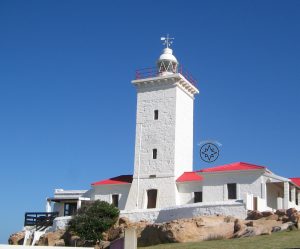 Visit our own piece of Greece with white washed buildings steeped in history, breath-taking views over the ocean and blue, blue skies right here in the Garden Route.

I think an appropriate way to end this post is with  the lyrics from a song by a local singer, Elvis Blue.