A WALK IN ST GEORGE’S PARK

Today we opted to walk instead of drive in our exploring stint.  A leisurely afternoon stroll (actually in search of a geocache) took us to the historic St George’s Park and surroundings to learn and appreciate a bit of history.

Our first stop was at the historic Port Elizabeth Cricket Club (PECC) which was established in 1859 where a club match was underway. 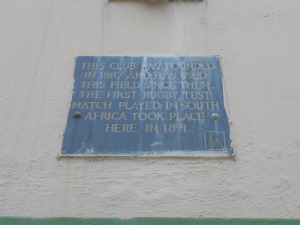 The grounds boast a couple of unique achievements such as:

In 2003 it was only the second season that PECC and Crusaders Rugby Club did not share their turf during summer and winter respectively.  The Eastern Province Cricket Board could not afford to have the field badly churned up by rugby boots just before the 2003 Cricket World Cup. 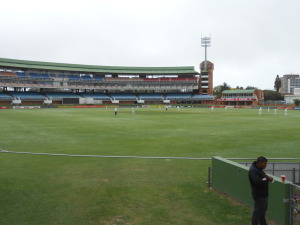 Out of the stadium and on towards our next point of interest which is the St George’s Preparatory School just opposite the tennis club.    Knockfierna (Hill of Fairies or Truth) was originally built in 1899 as a beautiful grand Victorian Mansion by John Daverin, from Ireland, who was a successful Wool Merchant. John and his wife, Clothilda, brought up their 7 children in the grand style befitting this era. 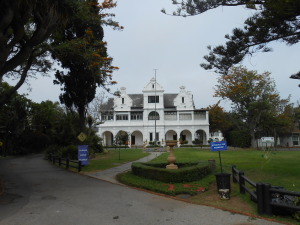 Sadly there is only a dilapidated building left  of the tennis club as it had to make way for the refurbishing during the 2003 World Cricket tournament.  The Port Elizabeth Lawn Tennis Club (PELTC) in St George’s Park was founded in 1879 making it the oldest active tennis club in South Africa.

But on with our stroll.  We made a quick detour to see what  the Nelson Mandela Metropolitan Art Gallery offers which, to our surprise, was open on a Saturday afternoon.    As we were exiting the gallery I saw the War Memorial and gave it the due respects.   This was the halfway mark of our stroll. 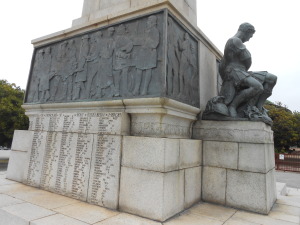 The geocaching walk took us to the public swimming pool which is sparkling clean and attendants on duty at the entrance (and they were not sleeping!).   Entry to the pool is a mere R9 however I spotted only two elderly bathers.  The gardens in front of the pool is bright and colourful and creates a real summer atmosphere. 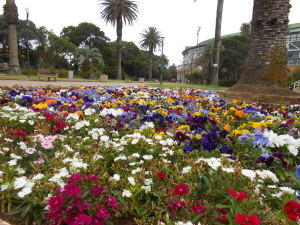 Next was Prince Alfred’s Guard memorial. It was erected in 1907 in remembrance to men from the guard that died in four different wars. On the top of the central pedestal is a life-size figure of a sergeant-major of Prince Alfred’s Guard in full dress.   The Memorial is also situated on top of Port Elizabeth’s second oldest water reservoir. 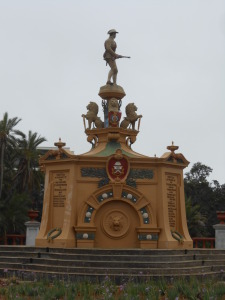 Our next stops took as to the old Sea Scouts house amongst the trees and then on to the St George’s Park Conservatory where we saw some magnificent tree ferns. 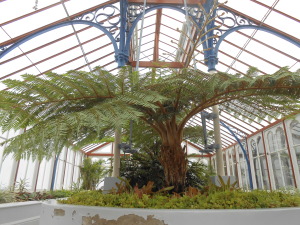 Close by at the Port Elizabeth Bowls Club (founded in 1882) lively music was playing and on closer inspection we found some bowlers enjoying their Saturday afternoon game on the rhythm of the music.  Not bad for a bunch of old people!  And on this happy note our stroll came to an end.

What a pleasure to visit the park with all its history dating back more than a century!