The story around the drostdy situated at the roundabout at the top end of York Street goes like this: apparently it was completed in 1815 to provide a residence and office for the first magistrate of George, Adriaan van Kervel.  However, I could not find any confirmation in the history records of the exact date of completion.

Then in 1826 when the second magistrate (Van der Riet) and his family was on holiday disaster struck.  Nearly the whole building was destroyed in a fire, but some parts could be saved and it was rebuilt.

History states that in 1897 the building was turned into a boarding house and in 1903 it took another change to become the Victoria Hotel which apparently served famous pub lunches.

Meanwhile Charles Sayers started a museum in a rented room in Courtney Street. The museum quickly expanded due to generous donations and moved to the Old Town House in Market Street, but soon these premises were also bursting it seems.

It was time for change once more.  The tourism boom arrived round about 1968 in the town of George.  There was a proposal to demolish the Drostdy to make way for a grand three storey hotel boasting three stars next to the door.  Luckily the demolition of the building was avoided when the municipality bought it in 1972 with the main purpose to establish a museum for George.  After extensive renovations, the doors opened in 1976 with Mr Sayers as the curator. 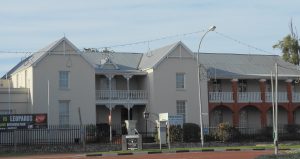 The  museum was still expanding and the Sayers Hall was added in 1991 and the timber exhibition in the back garden was completed in 1993.