The monument, which was opened in 1949, sits prominent on top of a koppie or hill overlooking Pretoria and its suburbs.   So, it is easy to spot it when you are approaching the city of Tswane, no matter which direction you are coming from. 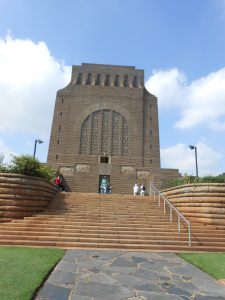 The reason for our visit today was to bring an American friend from the state of Texas to explain some of our history to him.  This massive granite construction (40 metres wide, 40 metres long and 40 metres high) is close to the heart of many South Africans -and it also impressed our Texan friend who can relate to the early Pioneers as America also share a Pioneering history.  The monument was built to honour the Voortrekkers (Pioneers) who left the Cape Colony to escape from British rule between 1835 and 1854. 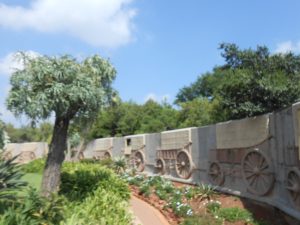 As I climbed the steps up to the entrance I l noticed a circular wall engraved with 64 wagons.  This represents the laer (laager) when the Voortrekkers had to defend themselves against the Zulus at the fierce and bloody Battle of Blood River in KwaZulu Natal.

Interestingly on the day of our visit there were more foreign visitors present than South Africans and the multi-language guides had their hands full to escort all the various groups.  I even noticed some visitors from Japan listening to their mobile audio device to follow the full story on display. Inside, on the entrance level walls, you will find the world’s longest marble frieze depicting, important scenes during the trek.  I was quite amazed at all the detail of the frieze such as the shoe laces, etc. 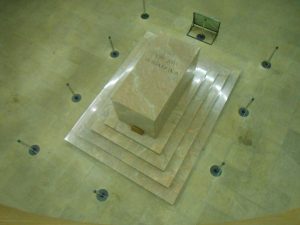 As I looked  down towards the lower level I saw the cenotaph engraved with the words “ONS VIR JOU SUID-AFRIKA”.   You will ask what is the importance of all of this?  Well, only once a year on 16 December at 12:00 a ray of the sun shines through a small hole in the dome directly on these powerful words.  These words are also the last line in the first verse of our national anthem.

16 December 1838 was also the date of the Battle of Blood River, commemorated in South Africa since before 1994 as the Day of the Vow.

If history is your thing, read the full details of this National Heritage Site on Wikipedia.