It was already late in the afternoon when we left home base on 31 December 2013 with our bikes to spend New Year’s eve somewhere in the quiet Karoo.  The road will lead us to Rietbron.

As everyone was heading for the coast the roads were busy, but luckily we were heading in the opposite direction to Rietbron – never been there before, so we did not know what to expect!. 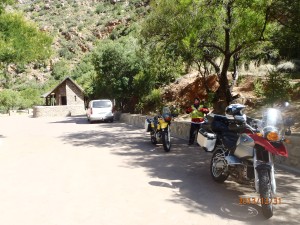 Our first break was in the beautiful Meiringspoort.  It was hot.  Time for a drinks and smoke break while taking a short breather.  Soon after exiting the poort  we turned right and were on the back roads of the Karoo.  No traffic and only silence.  A 100 kms of gravel roads lay ahead of us before we reached Rietbron. 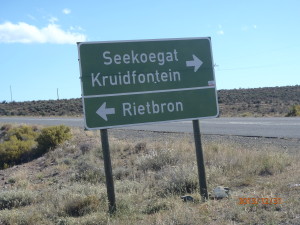 It started off with a nice gravel ride with views over the wide open veld .  Further into the ride the shadows were getting taller and the road narrowed considerably making it a bit of a tense ride towards the end.  But after a nice ride we reached the settlement of Rietbron  with a few houses, a church, school,  police station and our accommodation for the night  Karoo Hof.  In the early days of Rietbron Karoo Hof originally housed the police station with its holding cells and the court. 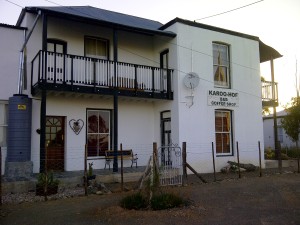 I think we were more or less the only guests in Rietbron (the locals probably still enjoying their holiday somewhere else) so we spend New Year’s eve with the host family of the B&B and enjoyed supper with them on their stoep chatting like old friends and admiring the bright stars in the dark night sky.  Real Karoo  hospitality.

After a hearty breakfast it was time to hit the gravel roads eastwards in the direction of Willowmore. From there we will venture even further into the Great Karoo to take the cement road via Steytlerville to Jeffreys Bay on the coast. 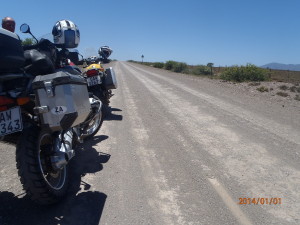 Our aim for the day was to stay over with friends at Oesterbaai near Humansdorp in the Tsitsikamma.  (A distance of about +- 300km for the day).  When we arrived in Steytlerville the midday temperature was already at 40˚C and soaring.  Time for a well deserved Coke (or two) on the stoep of the popular Steytlerville Hotel! 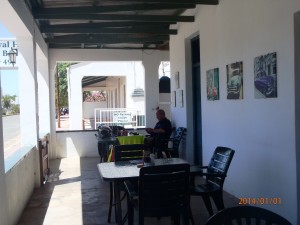 1 January 2014 we spend with our dear friends that farm in the Tstisikamma and also welcomed some new arrivals for 2014 (see the picture below). 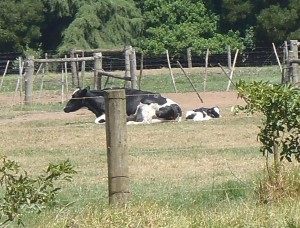 Our round trip was coming to an end.  It was time to take on the tar road and mad holiday traffic to get home.  Arriving at our usual half way stop at Stormsriver it was a bit of a madhouse with people popping out of cars, buses and taxis.  We opted for just a short smoke break and a sip of water as the queues were way to long to buy a cold drink.  From here it was slow going with all the traffic, but we arrived safe and sound at home with my four legged friends out of control from happiness to see me again. 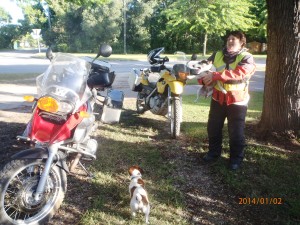 
We love hidden gems like this scale model of the K

What to see in George this holiday season?

Released from the covid cage! Now to spread our wi

Midweek views in #Herold to enjoy a cup of coffee

Once you have crossed the creek to reach @arusio_a

Scouting for some new routes today.