YOU HAVE MAIL IN TWEE RIVIERE

If you mistake Twee Riviere for Twee Rivieren you will end up in a totally different province of South Africa.  The one is on the R62 in the Eastern Cape, but you can easily overshoot it as well, and the other one is in the Northern Cape where you enter the Kgalagadi Transfrontier Park.  Today however we are visiting Twee Riviere in the Eastern Cape, about a two hour drive from the friendly city of Port Elizabeth.

The little hamlet has its origin as far back as 1765 when land  was first allocated to Jacobus Scheepers.  Once a blooming farming community over the years it also fell victim to the economic trends and hardships and today it is a real rural community.  One beautiful feature of Twee Riviere is the Belfry Kitchen in the hoofstraat.  Make sure you pinch yourself, because you can soon forget that you are in the Langkloof.

When I visited the autumn colours were in all its glory!  It felt as if I was walking in in an English setting with the red brick buildings, autumn colours, the sheep grazing in the street next to a red letter box.   Peeking through the impressive gate pillars – it is private property so I did not want to trespass – I saw the beautiful campus gardens which comprise several hectares.  Schrijwershoek is a tree arboretum that has been arranged to emphasize the different colouring specimens and the tree collection varies in age between 14 to 22 years in age and is apparently an ongoing project.  I wish I was allowed to enter the grounds to have a look at the trees as it must have been dressed in full autumn colours.

Unlucky for us we did not do our homework properly and The Belfry Kitchen was closed.  It was their day off.  While we were clicking away one of the resident students came around the corner to investigate what we were doing at the restaurant as it was closed and we were peeking around – I think we triggered the security beams!  The Belfry Kitchen prides itself that they produce fresh fruit, vegetables, herbs, nuts, dairy products, poultry and meat for their own consumption and produces treats at a fraction of the price that you will pay elsewhere.  It was part of our planning to have lunch at the Belfry Kitchen, but today this was not going to happen for us as our planning sucked.   I think we will have to make a booking for Sunday lunch and make a road trip to the Belfry Kitchen.

The Belfry Kitchen also marks the site of Twee Riviere’s original post office which operated when the R62 was the main route to Port Elizabeth.  With the coming of the N2 small towns, like Twee Riviere, and many other, suffered a great deal.  Another demise of Twee Riviere was the establishing of the nearby Joubertina with a bigger school and church. 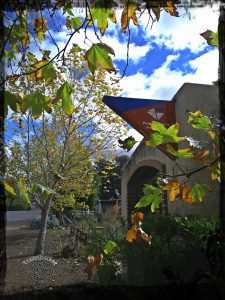 Until 1921 the post office was operated by the post master, storekeeper and school master, Denis Samson Schreiber. On Schreiber’s death in 1921 the responsibilities of the postal agency were initially assumed by the new shopkeeper, Mr Harold Strimling of Jewish Lithuanian decent, but the growing economy of Joubertina soon spelled the closure of businesses in Twee Riviere.   Despite this the postal agency carried on for another period of time until 1989 when it finally had to close its doors.  However, the day I visited I still experienced the old school post office atmosphere that I remember from childhood.

Once again, I must say if it was not for geocaching I would never ever have discovered this peaceful and tranquil placed tucked away on the R62.  Sometimes it is worthwhile to get off the highways and explore the backroads and discover and support establishments in rural communities like Twee Riviere.

Lastly, if you need to send a letter to Twee Riviere the postal code that you need to used is:  6411.