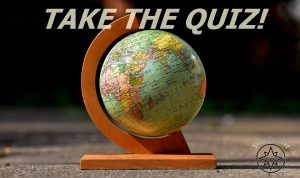 So, you think your general knowledge is good.  Come let’s play a game and see what your score is on South Africa – no cheating or Googling!  Shoot from the head/hip.

(Answers at the bottom of the page)

We as the Rainbow Nation has a rich culture and history.  A country at the bottom tip of the African continent, but do you know how many languages we speak?

America has Route 66, but we have our own Route 62 stretching from Cape Town to Port Elizabeth.  Why is our Route 62 famous?

My quiz journey now takes you to KwaZulu Natal where the famous Comrades marathon takes place between Pietermartizburg and Durban and thousands of runners participate each year.  Do you know why the first one took place in 1920?

We all know about the Big Five that you can see in our beautiful country, but can you tell which national park boast with the Big Seven?

Not many countries have more than one capital city.  We have three – can you name them?

You are familiar with the Grand Canyon in America and the Fish River Canyon in Namibia.  We also have a rare “green” canyon (which is the third largest in the world) in Mpumalanga.  Can you name it?

We are a “wild” bunch that lives down here in Africa.  Do you know where can you jump from a 216 meters high bridge, claiming that you have completed the highest bungy jump in the world?

As a nation we enjoy our unique South African food.  Can you name the healthy tea that only grows in the Cederberg Mountains of the Western Cape?

Do you know what two Nobel Prize winners lived in the same street in SOWETO Johannesburg?