AN EPIC JOURNEY WITH A 1962 LAND ROVER

A classic 1962 Landy was an item that was on hubby’s bucket list for a very long time.  So it happened that while he was working somewhere in Africa he bought this old lady over the internet and had to pick it up at O R Tambo on his homeward journey.

So off I go on a Kulula flight to O R Tambo to courier the necessary tools, several other items as well as some warm clothing that (we thought) would be needed  for this epic journey after the late snow falls that had the country buzzing.   A bit of TLC here and there and we set off on a 1 200 km road trip to take her home. 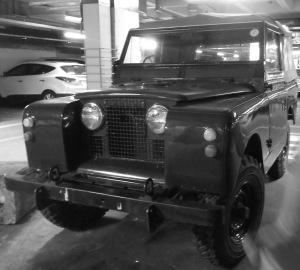 The first glimpse in the parking bay at OR Tambo

All went well until just before Kroonstad where our first of 42 unplanned mechanical stops started.  With a speed of about 20 kmph and a stuttering Landy we arrived at the Shell Ultra Stop in Kroonstad.  While buying some spares we  came across a very knowledgeable mechanic named Willie who lovingly looked at the Landy with and expert eye and put us on the road again. 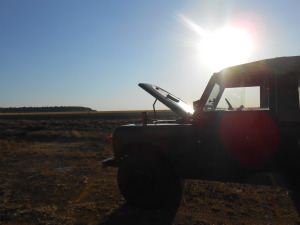 One of the 42 technical stops of the journey

At about 16:00 we left Kroonstad to find a resting lace in Bloemfontein for the night  – well, that was the plan.  However things did not turn out that way and we reached Winburg at a snails place after a wheel bearing seized.  This meant that we had to spend some time in Winburg as the required part only arrived on the Friday morning in Winburg. 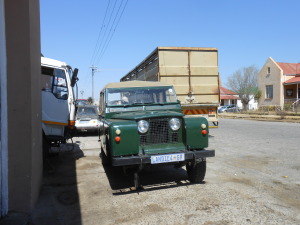 Waiting for the wheel bearing in Winburg

While waiting we did some sightseeing on foot in Winburg, drank a couple of liters of Coke and   Googled the history of Winburg as well as the history of the old stone church to pass some time waiting for the part to arrive.   Oh yes, and they do sell some very nice biltong in town! 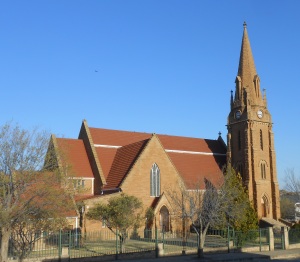 The sand stone church in Winburg

THE HISTORY OF THE DUTCH REFORMED CHURCHES IN WINBURG

“The European community of Winburg is famous for the differences in political heritage. The town was divided into two camps, due to their support to either the South African Party of General Jan Smuts, or the National Party of Dr Daniel François Malan. This led to the division of the Dutch Reformed Church into two separate congregations, Klip Kerk (Stone Church, because it was built from sandstone) and which was the original church for the Dutch Reformed Church and Rietfontein Kerk. Bitter feuds were fought between supporters of the two parties.”  (Extract from Wikipedia)

Leaving Winburg at about 14:00 on the Friday we hit the long but busy N1 South to our home town of George.  Hubby happily settled into a rhythm of doing 80 kmph with the Landy, whilst negotiating all the trucks overtaking us, and stopping ever so often to do some needy repairs throughout the night. 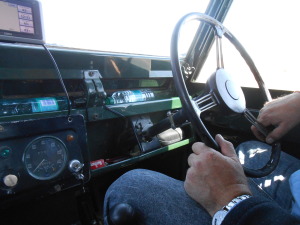 Getting the rythm of the Landy

But about 20 km outside Beaufort West the Landy was unwilling to go any further.  We had to phone a friend on the Saturday afternoon to get a mechanic from Beaufort West to where we were stranded at the side of the road.  Jacques from Swartberg Motors is a very hands on guy and had us on the road again in no time.  ‘n Boer maak ‘n plan – even if it means driving with a a jerry can of fuel serving as a temporary fuel tank and a fire extinguisher on the seat to reach home! 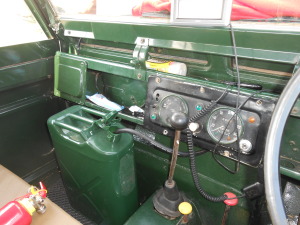 Fuel consumption is not great on the old lady and in Klaarstroom we ran out of fuel as the jerry can only hold 20 litres.  Things were still not in our favour.  At Klaarstroom the shop and pumps were closed, because it is Saturday afternoon and everyone was having a siesta.

On to Plan B – try to get some of the dirty fuel from the tanks to reach De Rust that is only a mere 20 kilometers away.  While hubby is lying underneath the Landy Koos Roets (the famous film producer who lives in Klaarstroom) pulls up in his diesel Land Rover for a leisurely chat (about Land Rovers) , but cannot help with some petrol as he drives a diesel Landy.

On to Plan C –  settled in for a long wait after we phoned up our daughter who lives in Port Elizabeth to come and fetch us and bring some much needed fuel with.

Then the joy when we see that the shop has opened its doors at 16:00 for business.  The friendly shopkeeper lady was asking where we are heading and so I told her my story.  Now we can at least buy a Coke for the long wait ahead of us.   Next minute her husband (who must have overheard my story) rocks up with a 5 litre can of fuel that will see us to De Rust!  As always the platteland is full of friendly people willing to assist. 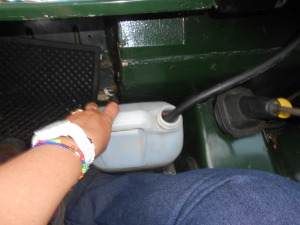 Yet another fuel stop in De Rust to fill up the jerry can one more time and on the road again! 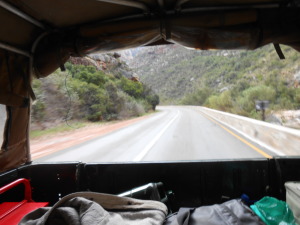 Past Oudtshoorn we met up with our daughter who arrived with another jerry can of fuel and some coffee to see us home.   From here on it was an uneventful drive home. 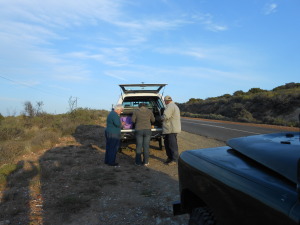 Help arriving in the form of our daughter from Port Elizabeth

An epic journey came to an end after being on the road since Wednesday morning when we left Kempton Park.