When driving our 1962 Land Rover home from Gauteng to George we had some mechanical difficulties and were compelled to stay over in the farming town of  Winburg for two days to get the problem sorted.

This gave me the time to roam around town and to explore all of the few choices of shops in Winburg.  In the centre of town is the magnificent old stone church with the following interesting history. 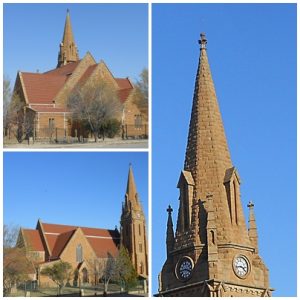 The European community of Winburg is famous for the differences in political heritage. The town was divided into two camps, due to their support to either the South African Party of General Jan Smuts, or the National Party of Dr Daniel François Malan. This led to the division of the Dutch Reformed Church into two separate congregations, Klip Kerk (Stone Church), which was the original church for the Dutch Reformed Church, and Rietfontein Church in Voortrekker Road. Bitter feuds were fought between supporters of the two parties.” (Excerpt from Wikipedia). 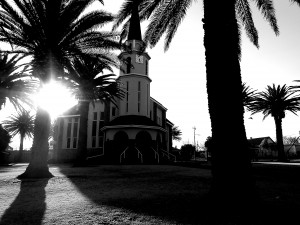 And, like a  true  South African, I also found a butchery across the Rietfontein Kerk which sells some of the best biltong  I have tasted in a long time and at a reasonable price too.  If we now are going in that direction we make the little detour into town to stock up on some padkos.