Just outside the town of Oudtshoorn you will find the settlement of Volmoed adorned with  a beautiful sandstone church with an interesting history. 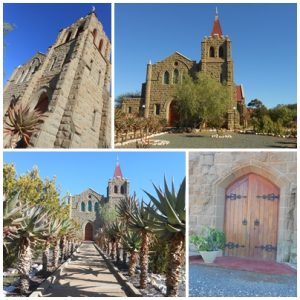 In 1910 Hall won a competition for the Dutch Reformed Church in Calitzdorp but “owing to the dissatisfaction expressed by the congregation” the job went to the second prize winner, Wynand Louw.  During 1920, at the age of 44, Watson Hall returned to Claremont.  At some point he was architect to the Rugby Union for a period of four years during which time he built stands at Newlands Rugby Grounds.

An interesting note in the Royal Institute of Britsh Arichtects (RIBA) states that he did “nothing outstanding, but specialized in churches and schools.”

Geocaching takes you places!   Visit the following cache at this site:  Volmoed (GC5F5KX)