The sound of an African wild dog will send shivers down your spine if you hear it for the first time.  One of it’s most striking features is it’s very large round ears. The ears are not only perfect for hearing calls over large distances but are also important for heat loss to regulate their body’s temperature.  They are very efficient and agile hunters capable of reaching speeds of up to 55km/h.  So watch out for them! 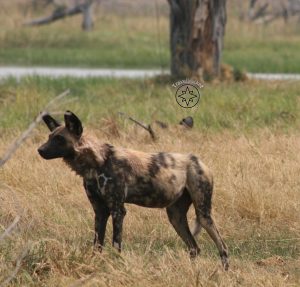 Like the African civet, each of these dogs has a unique coat but they also stand out because of their interesting toes. While all other canid species have five toes, the African wild dog only has four.

Status at the moment:   Endangered (estimated 5 500 left on the content)

These beautiful creatures are nocturnal and you have an off chance that you will spot one once in a life time.  Going around a lot of national parks it was only the second time that I was fortunate enough to witness one.  This beautiful animal will rock up at your camp without you even knowing it as they are masters of stealth. 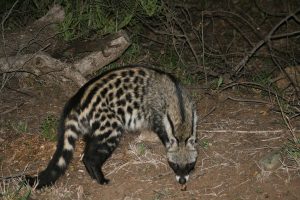 Each African civet has a different pattern of brown and black spots on their coat. This colour combination provides excellent camouflage in the forest.  Their natural habitat is becoming more and more under threat, because of expanding farming activities, but luckily they are very adaptable creatures and are not on the endangered list for the moment.

Status at the moment:  Least Concerned

As its alternative common name of ‘Zanzibar colobus’ suggests, Kirk’s red colobus is found on the island of Zanzibar. Its population is worryingly small today and it is estimated that as few as 1,000 to 1,200 individuals persist, mainly within the Jozani Forest Reserve. A small number of individuals also live on nearby Pemba Island, in the Ngezi Forest Reserve. 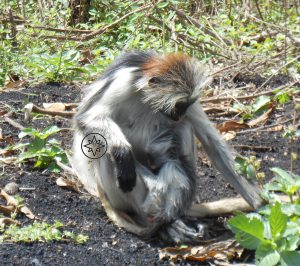 I was astounded as to how tame these primates in the Jozani forest are when we went on a walking safari.  Some of them came as close as one meter from where I was standing, sitting down and foraging in the leaf carpet for some food.  For me this was a special experience!

Status at the moment:  Endangered

A kudu might look big and clumsy but they are actually swift and excellent jumpers. To clear a fence of 2m (6.6ft) high is nothing out of the ordinary.  They are also responsible for many accidents at night in the Karoo area of South Africa.  So be on the look out for them at night. 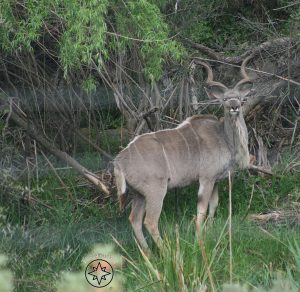 They have long necks that they use to reach food on high branches. The only other animal that beats them on their impressive reach is the giraffe.

The meat of the Kudu, having a coarse grain, can easily be mistaken for beef.

Status at the moment:  Of least concern

There are two species – blue and black – and another species that are only found on the African continent.   The black wildebeest has a lovely white tale, almost horse like, and the blue wildebeest has an all black tale. These strange looking (somewhat ugly) animals are already extinct in Malawi, but was reintroduced successfully in Namibia again. 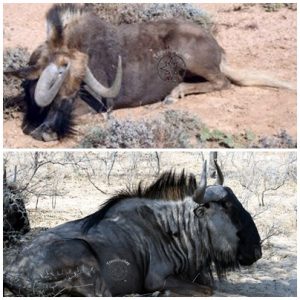 The blue wildebeest is best known for the yearly migration that takes place in the Serengeti.  The Great Migration sees over 1.5 million wildebeest, 200,00 zebra and a host of other antelope traveling cross country.  During the migration period around 250 000 wildebeest and 30 000 zebra are killed off every year as a result of predation by carnivores, but also from thirst, hunger, and exhaustion.  If they can survive the migration stint they have a life span of up to 20 years!

Status at the moment:  Not threatened

“Look, it’s a deer! It’s a baby giraffe! No, it’s a gerenuk!”  This is about the best description for a gerenuk that I have stumbled upon.

The name ‘gerenuk’ means ‘giraffe necked’ in the Somali language and is also known as ‘Wallers Gazelle’.

We were fortunate enough to spot these rare animals on the horizon while crossing the Chalbi desert in Northern Kenya.  The image, which was taken with my mik en druk,  while driving, is a bit blurry, but this is my proof that I have seen three of them!

Status at the moment:  Conservation dependant

“You either get the point of Africa or you don’t. What draws me back year after year is that it’s like seeing the world with the lid off.”  — A A Gill