On an overcast morning, with all the holiday makers gone, and the schools starting today I took the drive to Belvidere near Knysna.  I had the streets almost to myself except for the garden services mowing the lawn and the odd resident walking their dog.

As with so many places near your home you tend to seldom visit them, because they will always be there, but as I slowly drove into the village at nine o’clock a Knysna loerie was spreading its red wings as it crossed the road in the tree tops.  What a welcoming sight!  This alone was worth the visit.

When I arrived at the Holy Trinity Church, designed by Sophy Gray, with its romantic setting and history there was a service.  So I strolled around the village to make up time, because I wanted to visit this historic church after reading its story.  Luckily the church is open from 08:30 until 17:00 every day (entrance free of charge) except when there is a service.  So time was on my side! 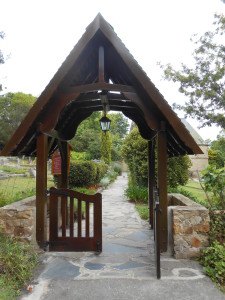 At the entrance gate

Sophia (Sophy) Gray designed no fewer than 40 of the 50 Anglican churches built during her husband Robert Gray’s bishopric. She was the first woman to practise architecture in South Africa, and one of the earliest to do so in the world. No mean feat for a woman who was a wife during the Victorian era, and a mother to five children.    Remarkably she was totally self-taught, with no training bar her natural ability to paint, and a propensity to observe the rudiments of architecture.

Most of Sophy’s churches are found in the Western and Eastern Cape, but since she was an adept horsewoman and accompanied her husband on many, if not most, of his extended journeys, her churches lie as far afield as Willowmore , Bloemfontein and even Pietermaritzburg.

There is a bit of a love story attached to the church as it was built by Thomas Henry Duthie, who was the founder of the village of Belvidere, for his wife Caroline, a daughter of George Rex, the founder of Knysna.   The Duthies built their home on the farm on which Belvidere was established and decided that they needed a church to complete their happiness.  The church would be used to celebrate things like holy days and the baptisms of their future children. 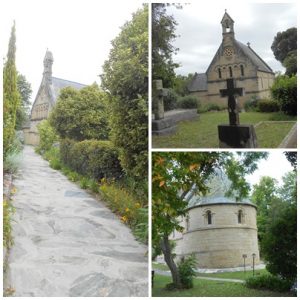 During my wanderings I even saw a street and a lane in the leafy Belvidere were named after Sophy and Robert.  Before today and before reading the story of the church these street names never had any significance to me at all. 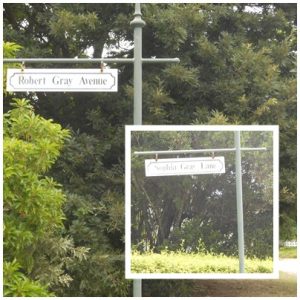 The street and lane named in their honor

On my way to do a nearby geocache I accidentally stumbled upon the original entrance to the farm Belvidere which formed part of the historical avenue of trees planted in 1852 to link Belvidere House with the Holy Trinity Church. 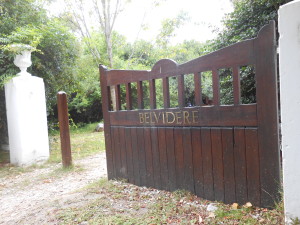 Near the church entrance, tucked away between the leaves, you will find a commemorative plaque in honor of one of the descendants of the three original stone masons (Alexander Lawrence and his brother James and Alexander Bern) whom helped to built the church way back in 1851. 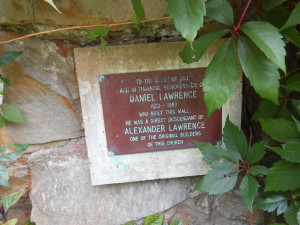 The plaque near the gate

I am glad I took the time to revisit the church with my new found knowledge and spent some time in the beautiful leafy village of  Belvidere.  My life was enriched and I sincerely hope this village will keep its charm!